Highly-developed scientific research and the education system lie behind Finland’s success story. Finnish universities in the 2020s will have overlapping roles that are local, national, and international.

Finnish well-being has been built on education and the competence and expertise of its workforce. A hundred years ago universities had a national task to help build a Finnish welfare society. The societal role of Finnish universities in the 2020s is a synthesis of its national and international roles.

Universities need to be more international and generate achievements that are more globally relevant in order to produce visionary research and enhance a critical understanding of global problems. At the same time, universities face many national expectations: they are expected to stimulate economic growth, educate citizens, fill gaps in skills requirements, secure the evidence base for decision-making, and raise the general levels of education of the nation.

Universities’ old monopoly positions regarding data, information, professions, and their elite status in society is unraveling all around the world. Digital communication has made information easy to access, but this development has also changed the privileged position of expertise in public debates. The need for critical thinking continues to grow, however, which is why it is necessary to actively safeguard the position of scientific knowledge.

The central function of science is to uncover the truth and the culture of education that grows around it. Both are also sorely needed in the post-industrial society. In the global, quick-paced labor markets, careers are more multifaceted and less based on degrees as before.

Universities have traditionally played a crucial role in building a prosperous society in Finland. We believe that this role should become even more significant in the years to come. Climate change and digitalization are challenging the structures of the traditional industrial society, and in these circumstances, scientific knowledge, education, and critical thinking are needed more than ever.

We have interviewed 23 people for this publication, including university leaders, university employees, and scientists researching outside Finland. Additionally, we interviewed politicians, educators, media persons, civil servants, and members of advocacy groups.

Universities in the 2020s: key conclusions

Download the full publication: The need for scientific knowledge, education, and critical thinking is growing − 4 theses about the role of universities in Finland in the 2020s

Demos Helsinki works broadly with universities, scientists, research funders and users of scientific findings. If you became interested or have questions, please contact the Science in Society team. 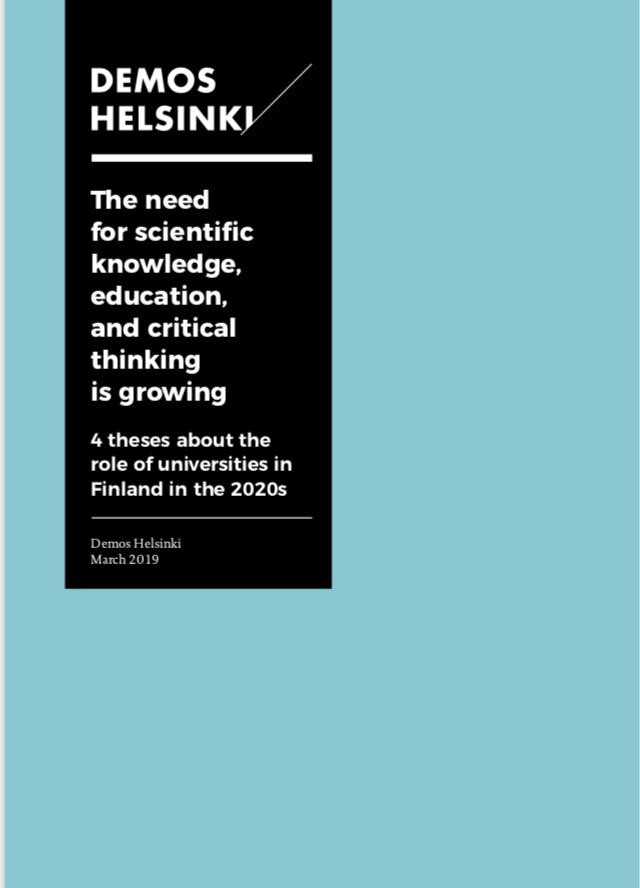 The need for scientific knowledge, education, and critical thinking is growing − 4 theses about the role of universities in Finland in the 2020s