Today, this is more obvious than ever. The coronavirus, and the COVID- 19 disease it causes, have globally forced societies to inhabit a transitional stage. In this stage, surrounded by crisis, they focus on survival and taking quick, measured action one day at a time while trying to see past the crisis into the future.

With the world at a standstill, it may be easier for societies to see what needs fixing, what to give up, what to keep, and what to rebuild from scratch.

We were also faced with this situation. For a long time, we imagined that the greatest problems of our time – such as climate change, inequality, and the experience of inequality – can be solved by discussing societal change and fine-tuning our current system, by doing the same things better and better.

That’s not how it works. We are at a dead end where, for example, climate change cannot be solved with market-based solutions alone, and politics cannot be saved simply by utilising science. The old world as we know it cannot be saved.

But what to do when the old world is falling apart and a new one does not exist yet? There are two paths forward: understanding power relations and imagining a better society.

What to do when the old world is falling apart and a new one does not exist yet?

The political debates of the 18th and 19th centuries took place along an axis with the preservation of the old world at one extreme and revolution at the other. Near the middle point of this axis were various reformist movements (which later mainly formed the basis of the industrial society’s solutions). The old, feudal, and protectionist society began to be dismantled and a new society was being built in its place. This new society was a compromise of various societal movements. It took both preservation-oriented and revolutionary thinking to determine who controls the direction of our society.

Above all, it took courage to interfere with the power relations in place and to imagine even radical changes, such as free public services.

In the 2020s, we are facing a similar situation. There is a great deal of talk about building a post-pandemic society, but there are huge differences in the kinds of action being proposed. Some of us want to preserve as much as possible of the former world. Others see the crisis as an opportunity to carry out manageable, yet significant solutions – for example, the measures being launched now to promote economic stimulus could significantly advance the building of a carbon neutral society.

Recently, we published a report with our new Demos Helsinki Fellow, Geoff Mulgan, which was featured in the largest Nordic newspaper, Helsingin Sanomat: “First, we have to imagine a better future.” The report argued that getting out of a crisis requires creative thinking. The future does not just fall out of outer space; instead, many things have to be imagined before steps can be taken in the desired direction. For some reason, people find it easy to imagine catastrophes, but visualising a road towards a better society is a lot harder.

One of Demos Helsinki’s most important tasks is to imagine a better future.

For this reason, one of Demos Helsinki’s most important tasks is to imagine a better future. We can imagine a future where the wellbeing of people and the environment is a prerequisite for economic development. We can imagine big cities sharing more power with their residents, and companies competing over which one has the greatest positive impact on ecological diversity and social equality.

Of course, this is much more than just imagination, as I hope you will realise after reading this annual report.

We must not lose pace in 2020. As well as imagining a new and better society, societal transformation requires action and a strong understanding based on scientific knowledge. That is why we carry out consultancy and research projects with hundreds of partners around the world.

In addition, we are launching a global initiative UNTITLED, which for the next 10 years will offer a platform for building a new societal model. Untitled is a revolutionary initiative that takes the form of experiments designed to make a new society a reality. This will allow us to find a path that will not lead us to the past after the crisis, but will help us jump straight into the future.

At Demos Helsinki, we strive to learn from our mistakes. In the 2020s, the world needs radical thinking which turns into concrete actions to help us make a fair and sustainable society a reality. This is where we come in amidst the much-discussed societal transformation. Achieving it is not easy and the coronavirus is making it even harder. But it is possible.

That is why I hope you will join us.

This text is a foreword for the 2019 Annual Report, written by Juha Leppänen, Chief Executive of Demos Helsinki. 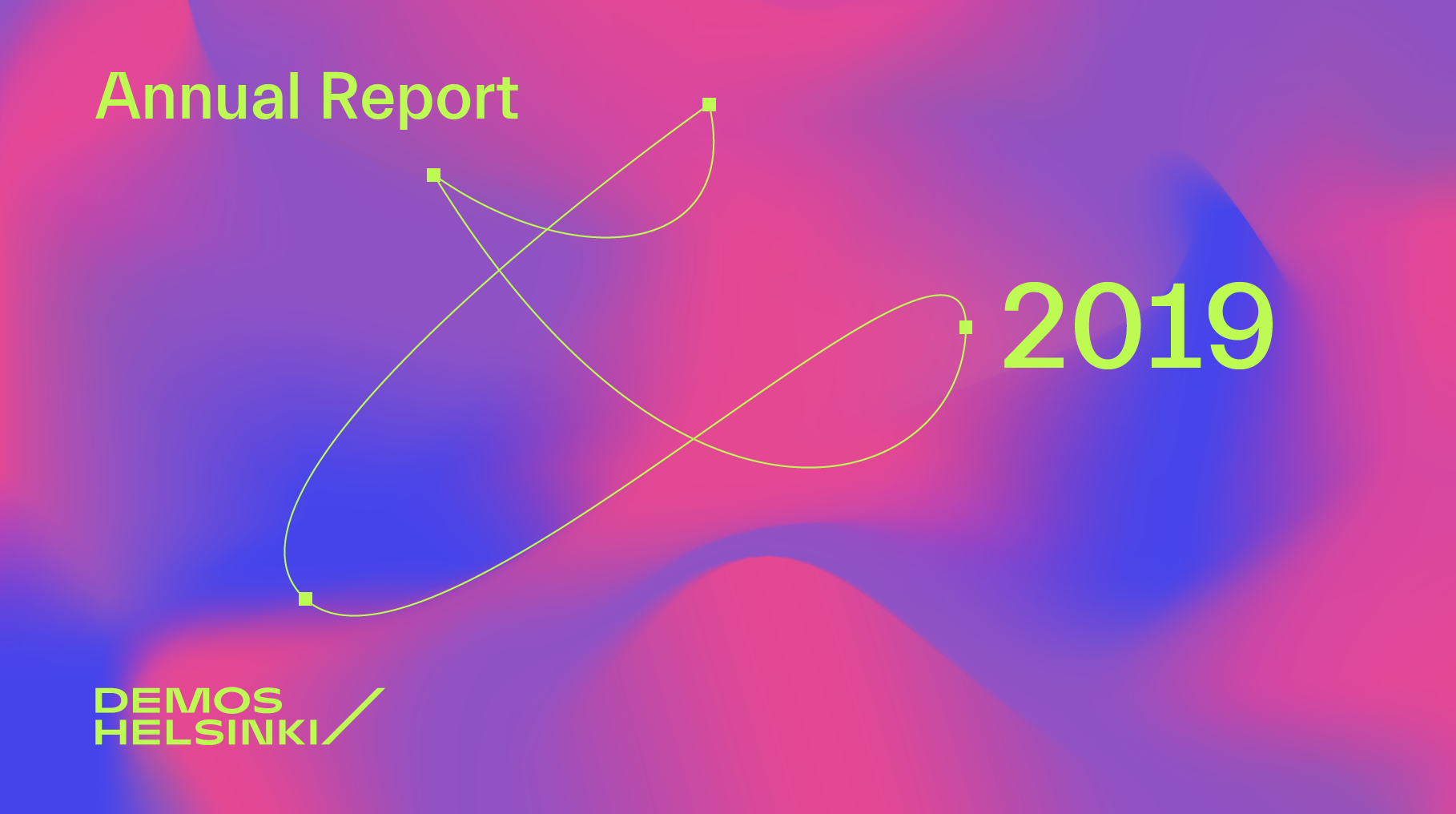