It all started as a curiosity in 2015. Now, the whole world is looking into universal basic income to stimulate the economy. The timing of Finland’s basic income experiment results could not have been better. But what can we learn from it when reimagining the post-pandemic economy and society?

It started as a curiosity and a vision

How did Finland become the first country in the world to experiment with basic income on a large scale?

The New York Times, the BBC, Forbes, Independent, and Time, among other media outlets, were curious in covering Finland’s experiment with basic income in 2015. However, none of the articles uncovered the reason why Finland can pull off such ambitious policies.

Behind the basic income experiment was a longer continuum of Finland wanting to turn national governance agile and human-centric, as we wrote in 2015. Instead of speculating on the impact of proposed policies, Finland was now ready to experiment, measure, and scale.

The hype continued. UBI was on the lips of everyone from Finland to the Netherlands, Switzerland to Canada, from governments to cities. Promising ‘free money for everyone’ was a provocative proposal that caught everyone’s attention.

Beyond the hype, one crucial question began to arise: what do we even mean when we talk about basic income? At that time, we started to initiate the discussion.

Now all governments are in the experimental zone

“It was kind of avant-garde but has become mainstream,” Roope Mokka, the co-founder of Demos Helsinki, said in The New York Times.

In 2015, no one expected that something like COVID-19 would make universal basic income mainstream – not just as an attractive, provocative concept, but as a promising proposal for stimulating the economy.

Now the whole world has been forced to do (some version of) experimental policy-making when attempting to contain the COVID-19 outbreak. States are coping with the probably worst ever economic crisis in which no previously tested measure can provide any significant aid. Therefore, experimentation is the only way forward. Several countries are looking into the opportunities of universal basic income, both for stimulating the economy and renewing the social contract with their citizens. Experimenting in the middle of an economic crisis, however, is totally different than in normal times. For example, control groups won’t be reliable because of the great uncertainty.

The Finnish government which ruled from 2015 to 2019 was the first government in the world to elevate experimentation to the highest political agenda. In practice, this meant that the government chose a selected group of policies to be implemented through experimentation, including the basic income experiment.

One thing valuable about experimentation is that it can open up the government’s imagination. It is needed, because some of the most in-demand solutions come from uncertain directions. When governments have experimentation in their toolkit, they can proceed with initiatives that are still too risky to be implemented. Through experimentation, they can reduce that risk.

Universalism is not only about material benefits

The financial crisis and public recovery plans 10 years ago are remembered for the big bailouts to big corporations. While the tectonic changes in political landscapes in various countries cannot be attributed solely to those decisions, they definitely contributed to the growing distrust towards the mainstream centrist parties and policies. It is quite evident that politicians are now more eager to both experiment and rethink the social contract with their citizens.

Now, the question is what UBI can do in restoring the public confidence and trust. Or, more precisely, what is needed if we really wish to renew the social contract of welfare states?

When answering these questions, we should not restrict ourselves to thinking that delivering material benefits to everyone is the only or sufficient measure to maintain the promise of a welfare state. In UBI, “universalism” refers to an idea that all citizens are provided access to a number of benefits, services, and assets (everything from welfare benefit, education, child and elderly care, health care, public libraries, and playgrounds) regardless of their current wealth or social status, without means-testing. On the one hand, this helps people to have access to very fundamental things that can help them advance in life, without spending too much effort in considering trade-offs between these merit goods and other forms of consumption. This universal access is important but not enough. We need just as much to find solutions to tackle the diminishing sense of belonging and the increased cognitive stress that are occuring as a result of uncertainty related to work and income.

Promising cash to everyone keeps us far from the ideal of universalism. It is not self-evident that income would be the most effective way of implementing the model of universalism. In 2019, we listed five other ideals behind the basic income after the preliminary results of the Finnish experiment came out:

Quite evidently, the Finnish experiment aimed at reaching the first goal, whereas currently, in several European countries, there is a need for reaching the second one because of the cash poverty people are facing. However, in order to restore the confidence and to renew the social contract, goals 3-5 have to be considered, too, if politicians are to learn from errors they or their predecessors did in 2009 with recovery confining in company bailouts and austerity in public services that people faced.

The results of the research project on Finland’s basic income experiment 2017-2018 were published on May 6th, 2020. It is fair to say that the Finnish experiment failed in its main target: it did not bring about significant employment effects – this was actually a rather expected result. Kela (the Social Insurance Institution of Finland) and Tänk (a Finnish independent think tank) conducted an extremely detailed pre-study to prepare the experiment. Referring to studies on Seattle-Denver basic income trial in the 1970s, the research group suggested that employment effects would be visible only after an experimentation period of 2.5-4.5 years. Yet, politicians decided to confine the experiment to only two years, neglecting the results of the research they had commissioned themselves. 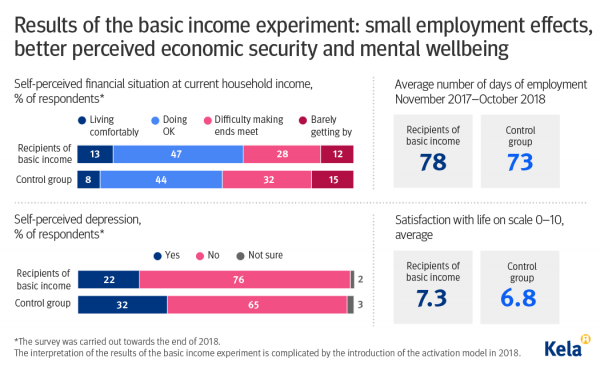 It is good to acknowledge that the Finnish basic income experiment was not a test of universal basic income (UBI) as such. It targeted only part of the population: those with a long unemployment history. It did not aim to build universal structures, something that all members of a society would share and be entitled to.

The study on the experiment indicates results that are extremely relevant when assessing them from the vantage point of the world of (post-pandemic) 2020. According to the study, the participants of the 2017-2018 experiment reported:

2. Higher confidence in their own future possibilities.

“The basic income recipients knew with certainty that they would receive a certain amount of money each month – the amount was not very large, but it was certain. Not because the income was explicitly basic income, but that receiving it could be trusted and life could be planned accordingly.”

“In general, basic income is positively related to trust and an individual’s faith in themselves and their own future. This is an important result, given that trust is a prerequisite for a functioning society.”

In other words, the basic income experiment was not successful in fulfilling its primary target (higher employment), yet, it provided evidence that UBI could help in achieving many other goals it has elsewhere hoped to achieve.

In the world of 2020, these goals may matter more than the straightforward goal of encouraging people to accept a job whenever offered.

It was a natural goal for a late industrial era society in which the evolution of professions was accelerating and many people found themselves in a limbo continuing to search for a job within their old profession or alternatively exploring new opportunities. Basic income was supposed to nudge them towards trying something new instead of waiting for a new job in their old profession to appear.

Now, we are beyond that point in which basic income would be merely a policy measure to nudge a small minority to work more. Instead, its main promise is now to rebuild the social contract of the welfare state. It is a good start. Yet, quite like we suggested a little bit over a year ago, we have to assume a wider perspective on universalism and what we wish it to bring about. In 2019, we wrote:

“However, when we consider the uncertainties that our current economic systems face, with a large number of probable discontinuities in dominant employment patterns, when we consider the many sources of tax revenue and the capacity of public organizations to produce services that would meet the diverse needs of constantly more heterogeneous populations, it seems quite unlikely that public redistribution and the provision of services alone would suffice. […] What are needed are solutions that unite people, companies and society in a feeling of mutual trust and convince everyone that technological progress can also result in a fairer society. People should have a chance to feel that they can actively participate in society and provide something beneficial for others. Different socio-political interventions should be able to offer resources that make this participation possible, even if this means that fundamental institutions must undergo drastic changes. Ensuring a sufficient level of income is just one part of the solution.”

It is quite evident that there are now more arguments and evidence supporting this claim than a year ago. Good, because we’re going to need it.