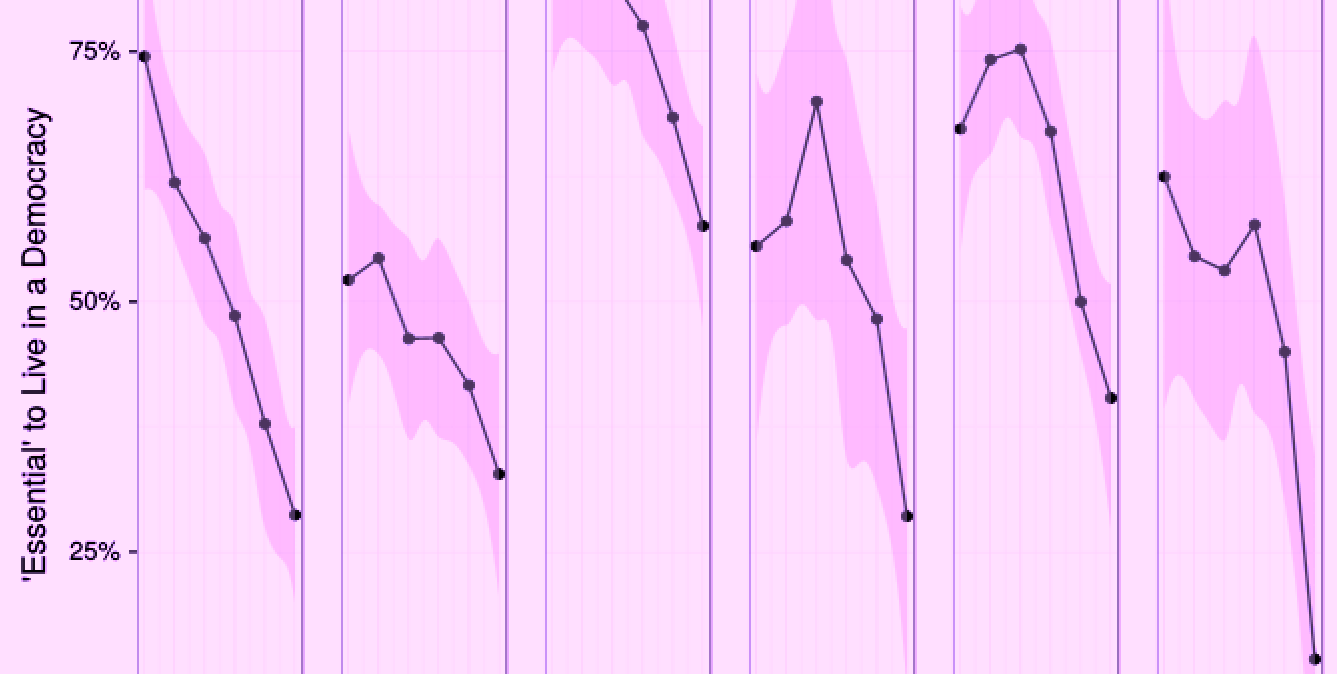 The real meaning of co-creation and participatory processes is not listening to more opinions and fine-tuning the outcomes accordingly but honestly open-ended deliberation and distributed decision-making on things that matter to us. That is how these processes can bring more democracy in democracy. Outi Kuittinen from Demos Helsinki talks to Eduardo Staszowski, Director of The Parsons Design for Social Innovation and Sustainability Lab at The New School in NYC, about expanding the opportunities for democracy from short-term election cycle exercise into an ongoing practice, and what design has to give in this.

Before I lead you into the discussion with Eduardo Staszowski, let me show you one of the things that frightened me the most in 2016. It is the graph the right. It made me think of the importance of a living experience and ongoing practice. If you go to the gym only once every few years, like I, the exercise feels arduous when you do. And you end up not missing it really. When you go that seldom – let alone for those who are yet to go – you know in theory that it would build your strength but you don’t experience its effect on improving your everyday life. It is easy to detach the effect of exercise from the way you feel. You might start to think the gym couldn’t even benefit your well-being if you did go. You’d rather have quick fixes someone promises without you having to sweat over it.

I’m a very reluctant practitioner of physical exercise but an advocate of regular, even daily democracy. I have planned and practiced co-creation over the past eight years. For me the core of co-creation is about democracy, in its broad sense of decision-making on common issues from the level of a society or community to the level of workplaces and groups, and about creating connections between different actors in the society.

I recently sat down with Eduardo Staszowski, Assistant Professor of Design Strategies at Parsons School of Design and Director of the Parsons DESIS Lab at The New School, who shares similar views. The core of his research is the development of approaches to enhance participation in policy development and public service design.
With his permission I publish part of our conversation on expanding the possibilities of democratic practice.

Outi Kuittinen: For you participatory design is an opportunity to further democratic processes and you situate it within a spectrum of political considerations (2). Where is it on that spectrum?

Eduardo Staszowski: If on the spectrum we have, for example, consultation and voting, participatory design is situated in the area of deliberative decision-making. Voting is the moment when you have the most ability to decide. But after the vote there is not much you can do. You can participate in a town hall meeting to give your opinion, but this is not about making decisions. In democratic participation there are other moments where you could and should be engaged with real power to decide something together.

Outi: Related to this, you have said that designing for social innovation is most of all about creating meaningful mechanisms of public participation. And claimed that the design community needs to shift the discussion focused on user-centered methods towards political commitment to participatory and democratic processes. (3) What’s the difference?

Eduardo: There is value in applying user or human-centered design to understanding needs. It is more a usability process; you can make improvements in the system you are working on. But people are not often asked about the underlying issues. Perhaps participants can really manifest their frustrations and talk about them but we are not necessarily letting people decide if the problem you are working on is the one that should be  worked on, or if this is the way things should be approached. For example, on a project you might be working on to improve the application process to benefits, to make it work more seamlessly for people, but you are not questioning the policy behind. You are looking at constituents as users, right? Especially if you are using the “user-centered” terminology.

But unlike in product development, in policy-making there are more things at stake, which you could, as a citizen, potentially be engaged with and not just at the very end of a given policy development. There are possibilities for opening up for other forms of participation, like participatory budgeting for example, so that the participation in the democratic system does not stop on at the ballot box. There are ways to re-engage with the government – the point is to participate in the way that the government happens. Decide on the things that are important to you, not only on the ballot. How public goods, services, and policies are effectively made, and you can go further and co-design these with government. You could even co-produce these, because there is an opportunity to engage in governance and production, engage people and their capacities in organizing things.

FROM PARTICIPATION TO DISTRIBUTED DECISION-MAKING

Outi: You have commented that while participatory design methods facilitate collaboration with public agencies, service providers, and the public, designers should go a step beyond participatory methodology and actively facilitate truly collaborative situations for shared decision-making?

First inside: If we look at how policies are designed and decisions happen, the process is – I simplify now – we elect decision-makers, they decide the agenda, get it to the civil servants and they again execute within the limits of the mandate given. Now, design could open up how policies are conceived, even internally, creating more relationships inside government, between different parts of the same organization, even across organisations, because that is when you start looking at problems differently. There are many issues you could look at in a more holistic way, like health care and well-being, which is about how we eat, how we work, the environment etc. Design can provide tools to place these questions side-by-side, to enact productive contrasts, comparisons and connections. I think design can lend processes that allow these conversations between organizations and viewpoints happen.

Then outside, between the government and the people: That is of course engaging more people and organisations in the decision making process, not just consultation. For example our project ”Designing Service for Housing” for New York City included community-based Housing ambassadors. That intervention strengthened the ability of existing organizations already advocating affordable housing to be more legitimized in relation to their role. It created more possibility for them to be heard in different ways – to reduce the tensions and mistrust in the system that engenders an ”us against them”.

And it creates different dynamics. There is another level of participation in that sense that design approach can create channels and ways for demands, possibilities, and ideas to be discussed, translated, and captured and new possibilities generated. So there are more ways to be developed for participation and distributed decision making. Design tries to understand what is emerging from the bottom and from the top, and operate in the middle space in translating and capturing ideas and possibilities, and facilitating pragmatic conversations on them.

Outi: I’ll conclude our conversation by linking it to the graph that I flagged earlier. It is not to say that more participatory or co-creation processes will single-handedly turn red to green in the situation we are at in our democracies. No doubt, vigorous political leadership and civic action are required to stop the anti-democratic slide. But as a part of that, there is lot of space in the spectrum of political considerations to create more democratic ways to work and take decisions on common issues together, and we need urgentlyto  increase these efforts and be serious about them. There has been talk and experiments on “new forms of democracy” for long, it is really about the time to switch gears to continued execution.

Outi Kuittinen is developing frameworks for co-creation, which would make more sense and change. Currently she does that as a Visiting Fulbright Scholar at Parsons DESIS Lab, the New School and at Education Redesign The Education Redesign Lab at the Harvard Graduate School of Education. She is Head of Co-creation at Demos Helsinki.

3 Staszowski, E., Brown S. & Winter, B. (2014) Reflections on Designing for Social Innovation in the Public Sector: A Case Study in New York City. In Design for Policy. Edited by Christian Bason. Gower.