I spent the past week in Dar es Salaam teaching scenario thinking to the Tanzanian Planning Commission, Ministry of Communication, Science and Technology (MCST), and several regional leaders. The visit was part of the TANZICT project, a bilateral collaboration between the MCST and the Ministry for Foreign Affairs of Finland.

The assignment given to our Demos Helsinki foresight team was to train Tanzanian officials in the use of foresight tools for their own work. Further, we were tasked to equip them with the skills of training other people in their organisations too. We didn’t just teach the officials scenario thinking though, we ran a scenario workshop together with them, resulting in three scenarios on the future of work in Tanzania. This hands-on approach aimed to provide the Tanzanian officials with an understanding of how foresight methods work in practice and to familiarise them with the tools they could use.

Teaching is probably the best way to hone and re-contextualise one’s skills. The Tanzanian society provided a great test-bed for scenario thinking. Consider for instance the following facts: 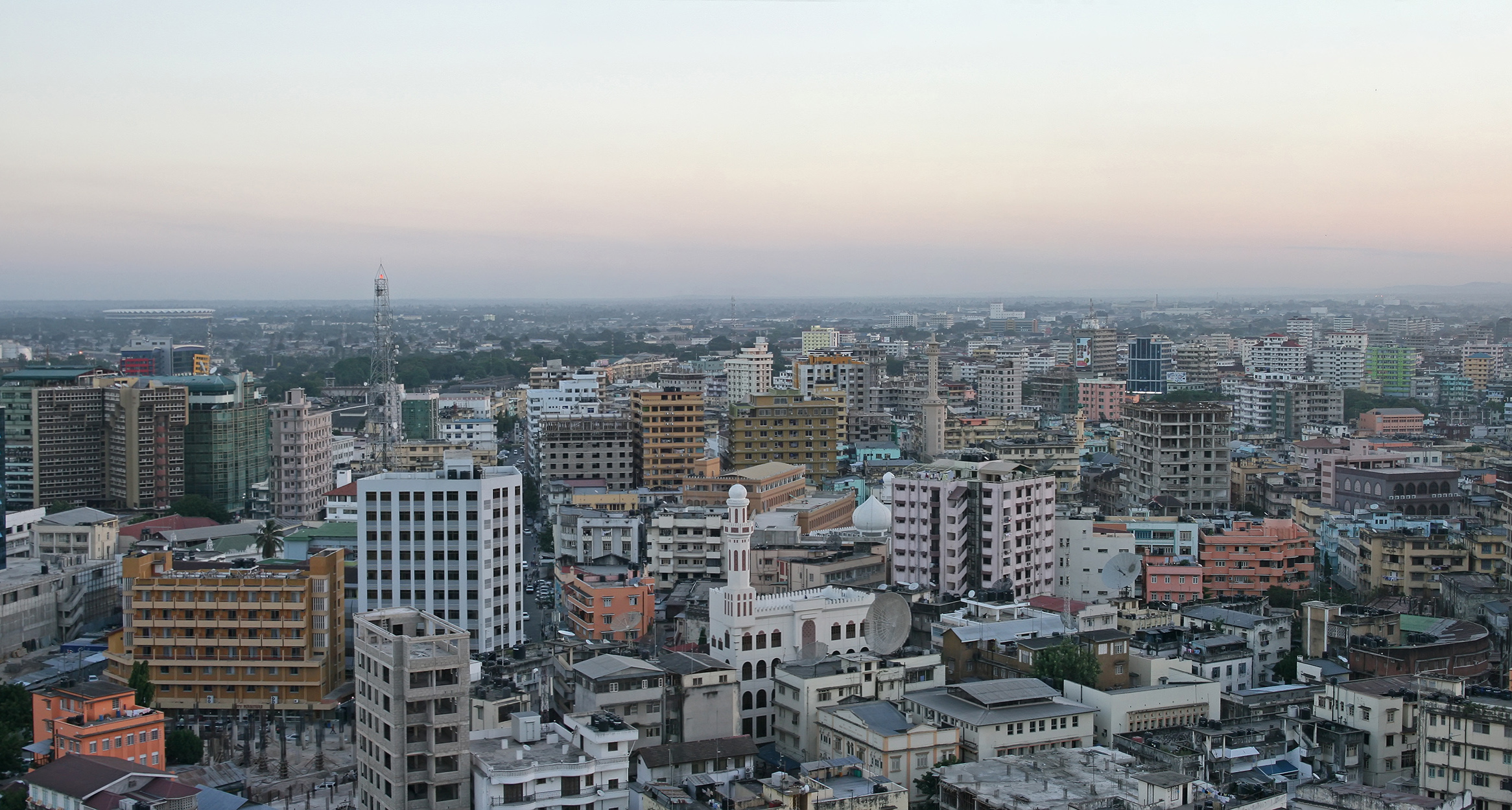 This does not mean that futures thinking in the case of Tanzania is impossible or useless – quite the contrary. Here is my list of seven ways of enabling the thinking of alternative futures in challenging contexts:

A scenario is not a plan B. Instead, scenarios can work as starting points for plans and visions. The goal is to have a rich understanding about different worlds in different futures. This is why I don’t recommend drafting “best case” or “worst case” scenarios either. Every decision and event has bad and good outcomes at the same time.

So why alternative futures before plans? Because there will be surprising events in the future which you can’t predict. During the oil crises in the 1970s Shell was the only oil company that had developed many scenarios about the future. One of these was of a very high oil price. With the help of this foresight, Shell was able to quickly understand the systemic interactions that come with very high-priced oil. Shell eventually emerged from situation in much better shape than its competitors.

2. If you don’t see any alternative futures, look further.

In Tanzania, megatrends render the alternative futures quite difficult to see. The trick for Tanzania, and any other nation, organisation, or individual for that matter, is to go beyond the linear causalities by extending the time scale. This is why a five-year plan – an otherwise helpful planning instrument – might sometimes limit visionary thinking: five years is a very short time for countries. Looking ahead 20, 30 or even 100 years into the future gives us enough room to think of visions of otherness. These are alternative futures that most of us don’t consider to be fully desirable, or undesirable for that matter, and which thus challenge our thinking and values.

3. Co-create your futures with the people who can make them happen.

We can influence our own futures, but no man is an island. Cocreation helps different stakeholders to understand the side effects of one’s decisions. Think about the future together with the people who might be able to implement your ideas or support them, instead of conducting desktop studies and writing reports. This does necessarily mean people in high places: equally important, or even more so, are the wider networks that weave in companies, citizens and the public sector.

After the oppressive apartheid ended in South Africa, the country was hanging on a thread. It demanded remarkable effort to develop the country in a peaceful manner instead of bloody revenge. One of the approaches that helped South Africa achieve togetherness in the society was the Mont Fleur scenario work. The project brought together 25 South African civil society, business and political leaders, across the political spectrum, on several cocreation weekends designed to shape the future of the country in a time of high uncertainty. The result was a fantastic scenario work illustrating the South African alternative futures from 1992 to 2002, with four different scenarios that helped communicate to a broad audience the necessary changes needed to bring about the desired change. (You can read more about Mont Fleur here.) 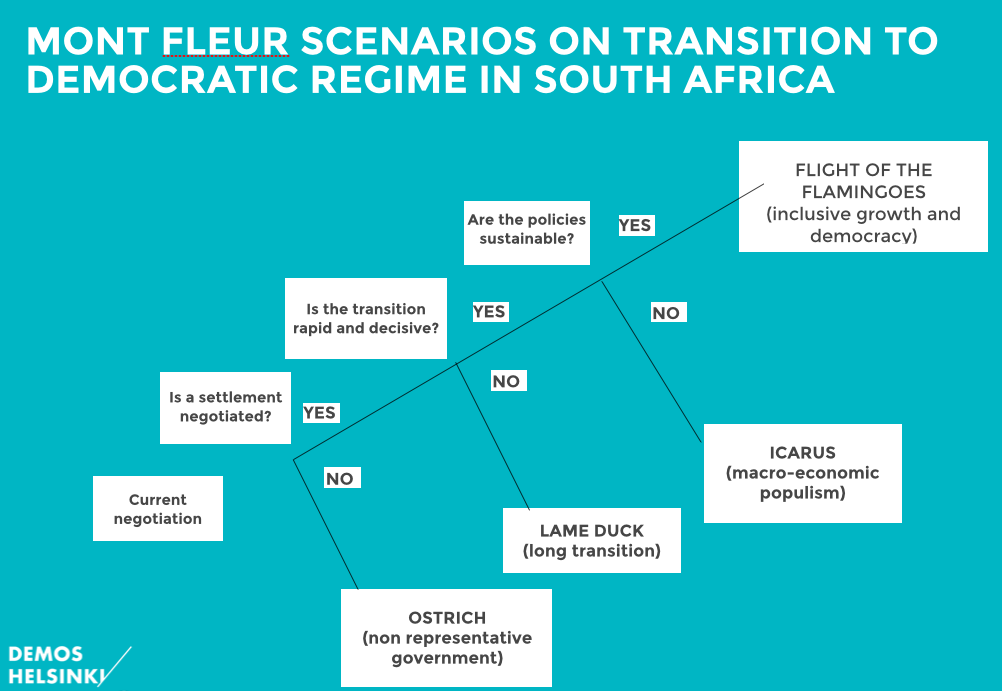 4. The more you know, the better. Scan the whole environment.

To understand the complex interactions that create our futures, you need to know enough about the present. This is an endless task, but your theme or topic will help you narrow down your scanning process to the essentials. More detailed themes require more detailed scanning of the environment. A good idea is to use a word list such as PESTEC (Political-Economic- Social-Technological-Environmental-Cultural) or its many variants and try to find relevant drivers of futures in each of the constituents.

Take for example a Finnish entrepreneur looking to launch a new driving app in the Tanzanian market. It is not enough to know that Tanzania’s population is 9 times larger than that of Finland: one must also take into consideration that, even though the population is 45 million, there are only 700 000 cars in the country. That’s 9 times less than in Finland. Still, similar problems like traffic jams are a daily occurrence thanks to the rapid urbanisation rate in cities.

5. Construct a Futures Table that helps you communicate and grasp your alternative Future States.

The futures table is an easy way to demonstrate the totality of the future states in your scenario work. It is built from variables and variable values.

Variables should demonstrate all the relevant drivers of the different futures. Relevancy is very much dependent on the topic. If we research the futures of Tanzania, it is relevant to include variable “A: Political stability [very stable, quite stable, very unstable]”. If we were to research the futures of the film industry in Tanzania for instance, I would recommend not picking that variable from the variable list. This is due to the fact that in a very unstable political climate it might not even be useful to think about the futures of the local film industry. Of course, variables can also be irrelevant by having no or very little impact on the chosen topic.

Variable values should be mutually exclusive and extensively comprehensive. This means that if there is a variable B: “source or economic prosperity”, its values should not only be the “Mining and drilling industry” and “tourism industry,” but also “both” and “neither”. In any case, the point of the Futures Table is to select one variable value for each variable. Future States are thus combinations of variable values and provide a rigid starting point for scenarios.

Or even for kids: 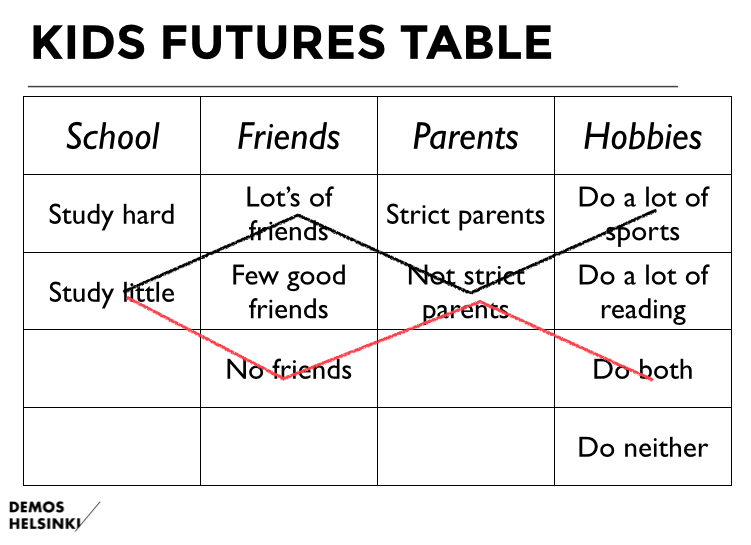 6. Work your way from the future to the present, not the other way around.

If you would make a futures study on the future of work in Tanzania in 2040, you might ask for example the following questions:

7. Write many scenarios and compare and contrast them.

There is no such thing in foresight as ‘a scenario’; they always come in plural. It is a good idea to construct several (2-5) scenarios. An individual Future State does not tell us much. Only when you analyze and compare different scenarios do various kinds of results emerge to help planning and implementation. Typically, it’s a good idea to search for differences in the gatekeepers (the actors who can make the scenario happen or alternatively, stop it from happening) and to look at the outcomes of different scenarios for the same personas or organisations.

Do you know which gatekeepers are shaping your own futures? You might be surprised at the results.