Platforms are not to be confused with traditional corporations. They are much more. Here’s three reasons why:

1. Platforms are a new, unforeseen and strong user of power

Platforms that aggregate people’s needs, physical assets and labour. Companies such as Amazon, Etsy, Facebook, Google, Salesforce, and Uber are creating online structures that enable a wide range of human activities. This opens the way for radical changes in how we work, socialize, create value in the economy, and compete for the resulting profits.

In future, all of our interactions with strangers will be facilitated by global digital platforms: from trade to meetings to services and peer-help.

There are two reasons for that:

Firstly, platforms lower the interaction costs and therefore a lot of things that were previously organised by the state, the traditional corporation as an employer or an NGO are not migrating to platforms, So platforms are successful due to the fact that they allow only certain kinds of interactions to happen. Even before the emergence of platforms there was nothing preventing people from renting each others’ flats – other than the fact that the negotiations would have taken forever. Now Airbnb governs the way flats are rented. This includes a myriad of rules that manage trust.

Secondly, platforms aim to be global monopolies, i.e. they only work and have a chance of being profitable if everyone uses them and using them is free or nearly so. This is also at the heart of digitalisation and information economy. Information famously wants to be free. In software driven services the only ways to protect a business from competition are brand and network effects. Therefore platforms grow and spread at a quick rate. Facebook reached the same number of customers in 3.5 years that took the telephone 75 years. Angry Birds reached the same number in just 35 days. 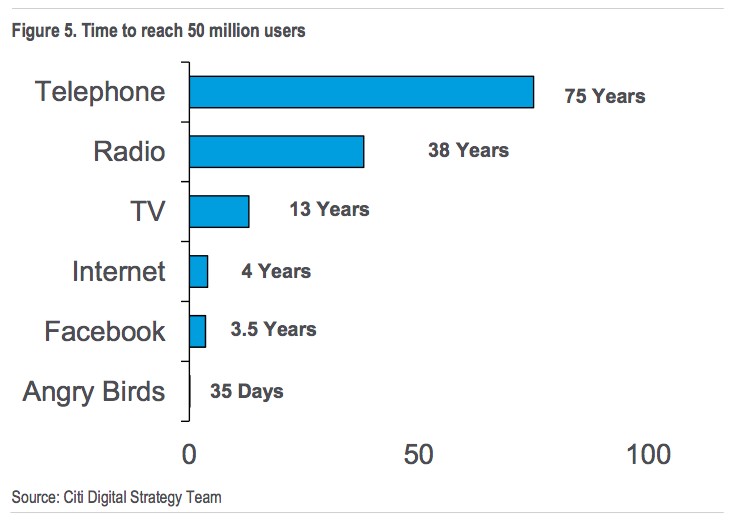 2. Most national governments will be powerless in controlling platforms before it’s too late

Who governs the platforms? How do people participating in the platforms have a say in what is done and how? How are their security and rights taken care of?

When more and more of our lives move to the digital realm the basic human right to have a say in structures that are forced upon us becomes critically important.

One attempt is the idea of co-operative platforms, where work providers and users create a platform together without a third party. However, such attempts face a nearly impossible task in competing globally in marketing, usability and price with the venture capital packed giants.

Because government are also paralyzed in front of platform governance, entrepreneurs play an immense role here. Etsy has created its own policy recommendation for social security of those who work on platforms such as Etsy.

The crucial question is if there are enough incentives for entrepreneurs to provide security to their contractors?  Currently we trust in the good faith of entrepreneurs as individuals despite the fact that at some point they will leave the company and it will become “just another corporation”.

3. Internet of no things introduces the platform under your skin

The first phase of Internet had to do with connecting all information to a network. New hyperconnected technologies connect all physical assets to a network, eventually melting it to our environment and even to our bodies. Applications run directly on the network, rendering terminals (smart phones, laptops, etc) useless.

The difference is astonishing. Currently nearly all of the internet searches in Finland are made through Google. If a similar logic applies in the future, all cars will be operated by Uber and all houses will be operated by Airbnb. Such a world is dramatically different yet not very far away from the world of today. Therefore anyone willing to have a say in what the future will look like needs to pay attention to the platform economy sooner rather than later. The shift towards an entirely different reality is already happening.